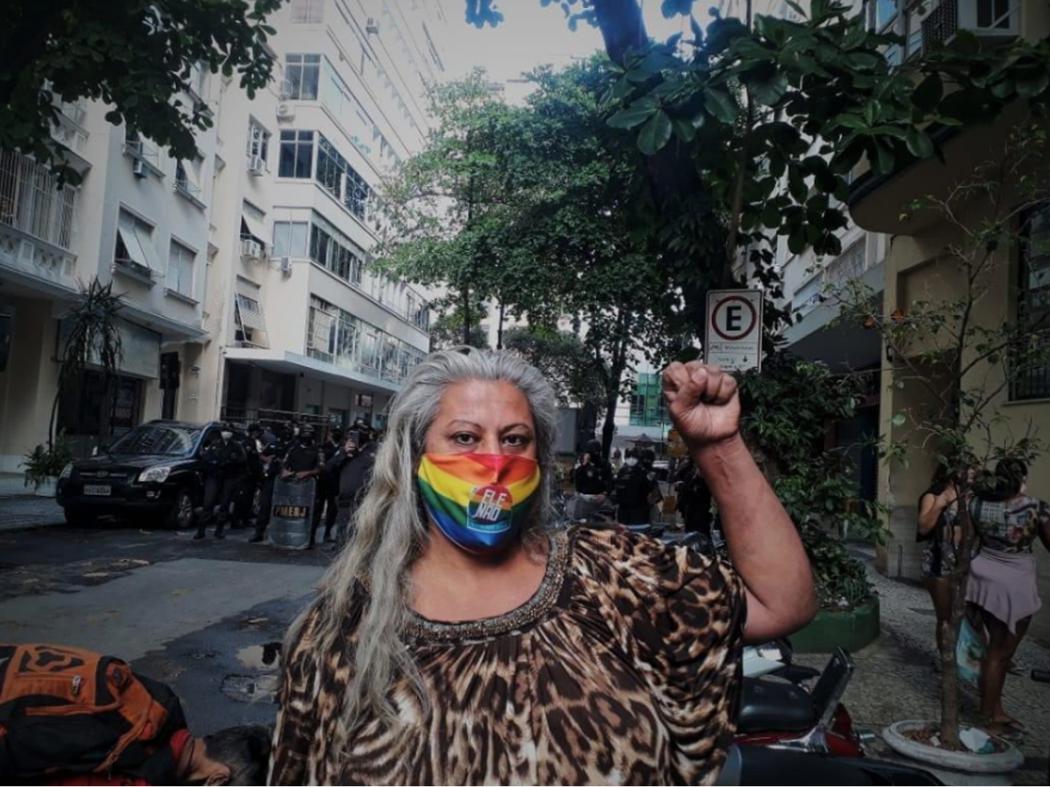 Last Monday police troops in riot gear appeared in front of Casa Nem, an LGBTQI+ community center,  and shelter in Rio de Janeiro. The aim: evicting the house. Their presence was met with resistance from both, residents and allies from the local community, that showed up to protest against the eviction.

Up to 60 LGBTQI+ people live in this house in Copacabana since July 2019. Casa Nem is providing a literal lifeline for vulnerable queer and trans bodies in Rio as Brazil has one of the highest known rates of trans murder worldwide. Before the organization occupied that very building, it was abandoned for ten years. Now – in the midst of a global pandemic – it needs to be renovated as it is uninhabitable, a supporter from Rio explains the official motivation of the government on social media. At the same time, the government has ruled that nobody shall be evicted because of Covid-19…

After hours of negotiation that Monday, Casa Nem signed an agreement with the mayor and the state government to get relocated into another building. Until that falls into action they will have to move to a school that is currently available due to Covid lockdowns. The supporter continues “they are now fighting to have that agreement executed” as the Brazilian government (led by sexist, racist, homo- and transphobic Jair Bolsonaro) is known to not always follow through with what it signed on paper.

Casa Nem faced a possible eviction for a while, so in late July the European Ballroom Scene gathered for the Lagoon Kiki Ball in Berlin organized by So Extra Berlin not just to finally physically meet again after lockdown, but also to raise funds for Casa Nem and the ballroom family Ilê Nem that was born out of this community center.

At the Kiki Ball, Max Folly, a Berlin-based friend of the coordinator of Casa Nem, Indianara, read out a letter she wrote to introduce the shelter and explain the challenges of LGBTQI+-people in Brazil and for Casa Nem.

In these short interviews, made before the eviction, Indianara and the Mother of Ilê Nem, Íya Nem Focatruá, explain the urgency of their reality.

Indianara is a trans activist fighting for the rights and survival of the LGBTQI+ community in Brazil. There is a award-winning documentary called “Indianara” introducing her work and the challenges in Brazil.

1. Why is Casa Nem such an important shelter for the LGBTQI+ community?
CasaNem is a place of deconstruction of the CIStem, of empowerment, political awareness, and a world with the maximum freedom to be who you are without labels or standards. It is almost a real utopia.

2. How is the current situation you are facing concerning the eviction of Casa Nem?
CasaNem is an urban occupation that was already in several places after the several evictions that it has already suffered. Today it is in Copacabana and those years of struggle strengthened it and now they promised us a space. The city hall and the state government are trying to find a way to make it happen. For the time being, we continue in the building. (Editor’s note: This interview was made before the eviction on Monday, but refers to the future plans.)

Fokatruá is the mother of a Brazilian Ballroom house called Ilê Nem that consists of bpoc queer and trans bodies only and was born out of Casa Nem. Ilê is yoruba for House. They use the African language, that is deeply rooted with black Brazilian culture, also for ballroom titles, such as Mother (= Íýa). 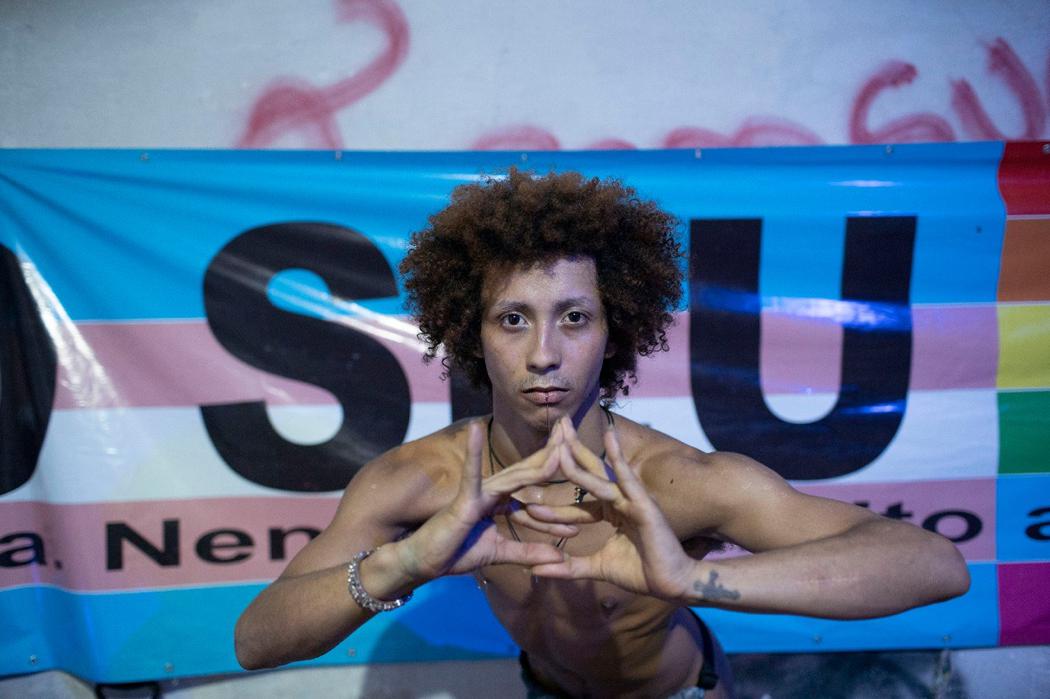 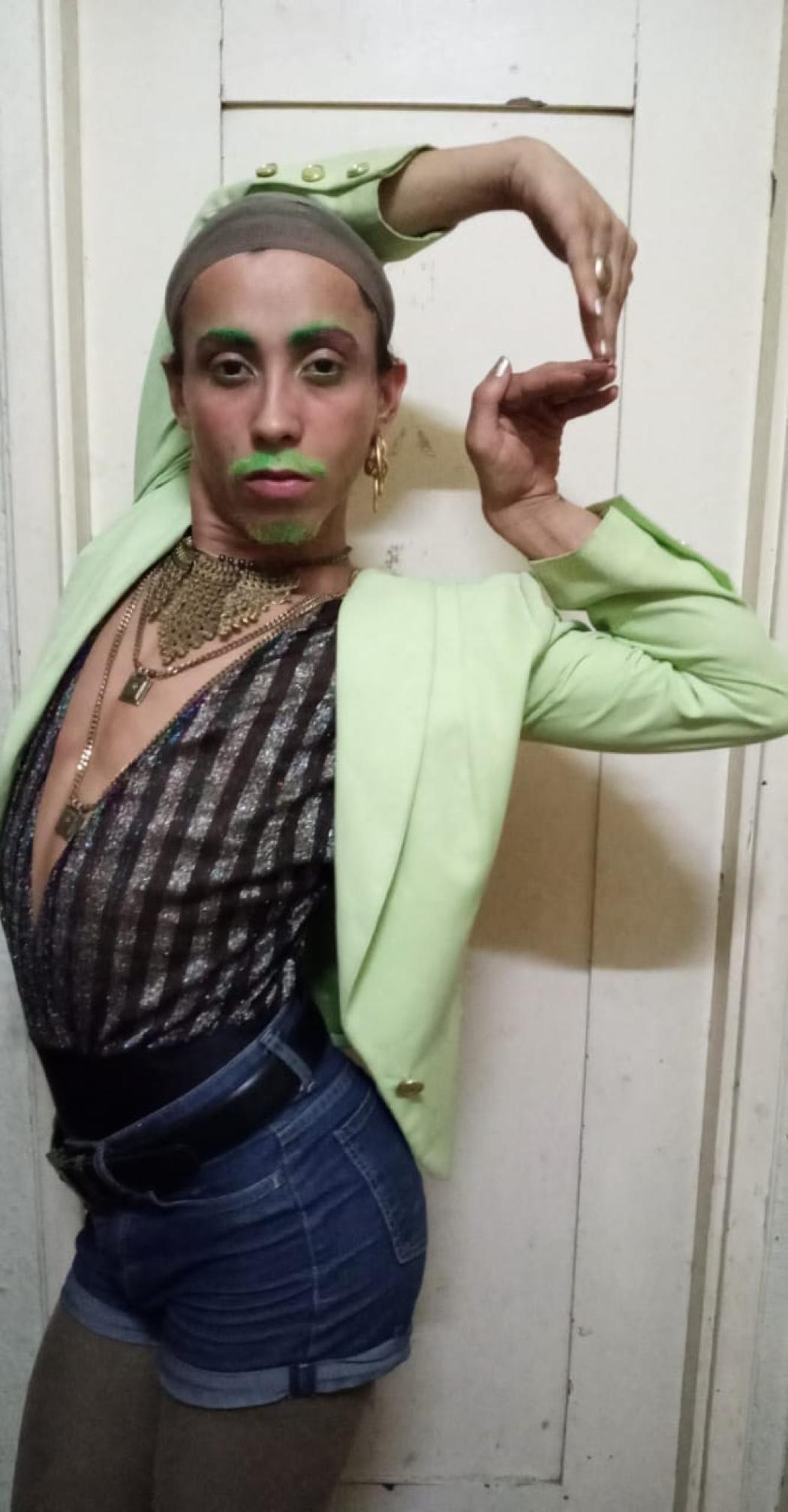 Would you please introduce the house?
The mess is over, the Ilê Nem arrived! Our Ilê, our house, it came from a feeling, a will, and a need of mine to feel included in a part of the ballroom scene.

How did you found Île Nem?
I had a not very welcoming experience in ballroom in the beginning, but I did feel like a part of that scene. And I realised that other bodies around me in my daily life had everything to do with that scene. So I already tried to found two houses before: Ilê Éuqueck and then Ilê Casa de Fokatruá. By that time I knew Casa Nem, the shelter, and who it is meant for. This gave me the will to spread the ballroom culture in this space. So I arrived with the purpose of taking these bodies to the culture that belongs to them. Over time I needed to be accommodated in Casa Nem in order to facilitate the development of the project. Then I turned Ilê Casa de Fokatruá into Ilê Nem, Yoruba for House of Nem. With all the representation and influence of African origin within our diaspora, we named it this way. Once I noticed a reciprocal interest of other members of the house, we decided to do a ball. It was on the 29th of January that I decided to make a debut of Ilê Nem in the ballroom scene. Ilê Nem was officially born in the scene – at a four-hour ball with only three categories, which is surely a historic milestone to the ballroom culture in Rio, in Brazil, and in the world. We are a house that really has a house, a real headquarter of refuge for people in a vulnerable situation. Here they already get some of that culture and the opportunity to experience and celebrate these bodies as they are or the opportunity to discover and know them. This is how Ilê Nem was founded.

What are your challenges to take part in ballroom culture/ Vogue Balls?
We have an immense issue in our everyday lives for being people in a vulnerable situation. Casa Nem is a space of sheltering for LGBTQIA+ in a vulnerable situation like us. This space doesn’t give you plenty, but it gives a solid support. The space enabled us to sort out all of those issues of Ilê, as we get all our outfits and clothes through the donation of collaborators of CasaNem. As for online communication we are living in a building where the internet is good, but the signal doesn’t flow. If you take a single step, the signal disappears. Then you have to take seven more steps and reset your device to try to have it back, so it’s hard to have stability. This hinders our participation in trainings, workshops, classes, balls, talks, meetings. It hinders our online relationship with ballroom. The majority of us don’t own a cell phone. Currently, with the government’s financial aid and the course Cooking & Voice, I managed to get a cell phone and internet plan, so I have been able to participate and have been trying to share those subjects, those classes, those experiences with the others. We are always connecting with the scene and always sharing information about what’s happening online, since it was already hard for us to be at balls IRL. We have issues with commuting because we can’t afford public transportation tickets to go to the balls, so a lot of times we just went by foot. We already walked from Copacabana until Lapa to participate in a ball which is about 7,5km. I really feel this strength and determination from the Nems. If we need to go all the way to the North zone, because there’s a ball, we really prepare, we want to go to and we will. Now the ballroom scene is really here to help and assist us. If we need to go to a ball in the North zone and we have no money to commute, we don’t need to walk anymore because we have a community that embraces us. I’m sure that if we need to go and tell them we can’t afford tickets, the ballroom will help us somehow and that has been great, not only to me, but also to my children. Seeing that people other than me are also empowering those bodies, highlighting how amazing those bodies are, has been great for me. The help of many other mothers and members of other houses that have been providing this support is great. But visibility is also another issue for us in the balls. Since most of us are trans, we perceive the invisibility of our bodies in the balls because the attendance is mostly by cisgender people, the balls are being made and produced by cisgender people. Our bodies are just there, without any reference to the fact that our bodies pioneered this movement.

To support Casa Nem and Ilê Nem follow this link to the crowdfunding of the Lagoon Kiki Fundraiser. Every coin counts!