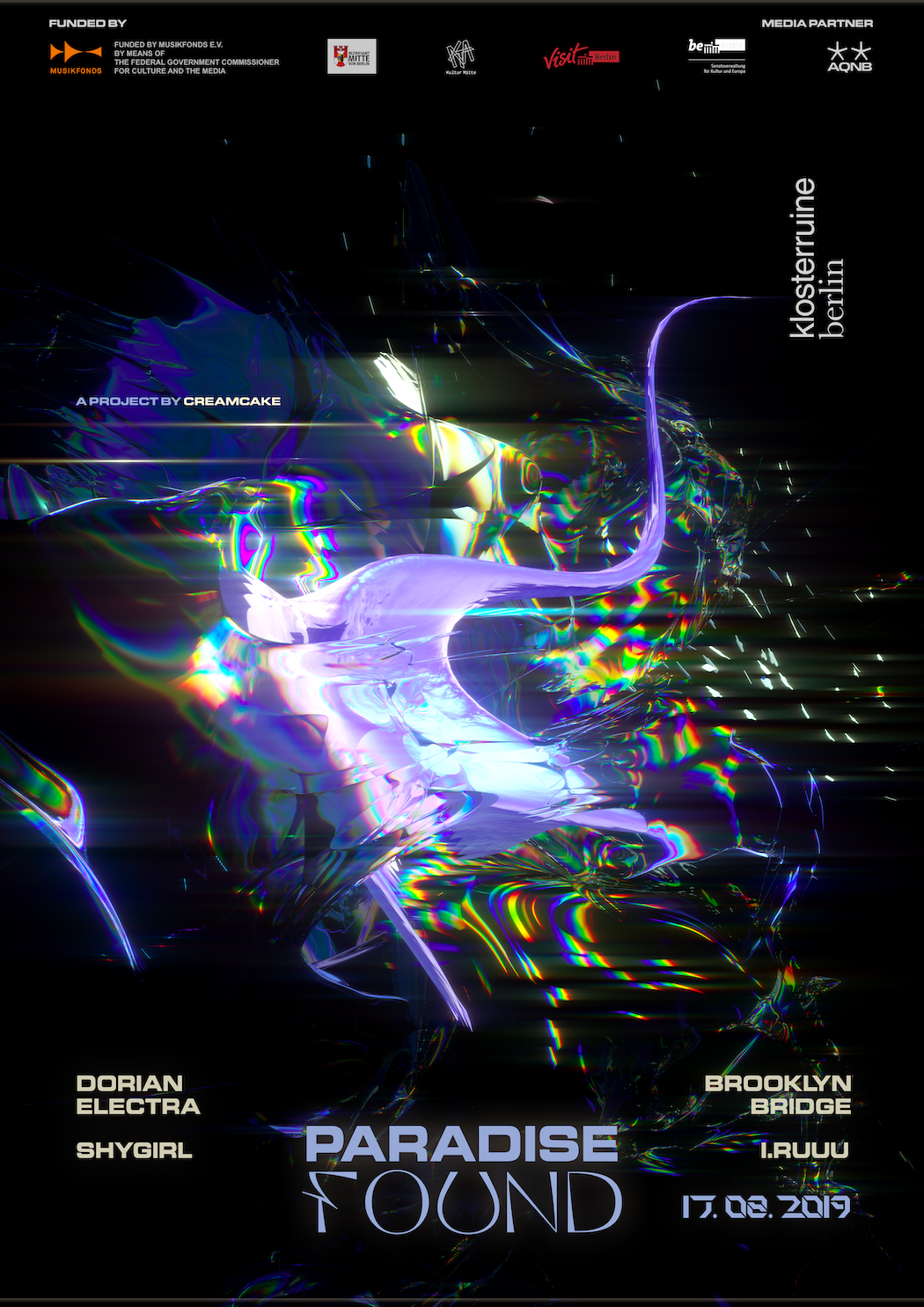 Creamcake announce the third and last “Paradise Found” event happening on August 17 at Ruine der Franziskaner Klosterkirche in Berlin. The last date includes performances, concerts, and DJ sets by Dorian Electra, i.Ruuu, SHYGIRL, and Brooklyn Bridge. The concert will follow the second of the series on July 27, bringing together a spectrum of experimental and progressive sonic and cross-genre live acts to explore themes of velocity and deceleration, concentration and contemplation, noise and silence, in the tranquil ruins of an inner city monastery. “Paradise Found” presents a diversity of sound, timbre, volume and speed in an effort to probe the affective and somatic possibilities of music to inscribe both calming and unsettling moments in an environment. Between organic and inorganic objects and elements, atmospherically charged fields form around the audience to allow for free movement within each idiosyncratic experience. Musical vibrations transmit between bodies of all kinds —people, plants, these crumbling monastic walls—creating a lively and reactive presence that absorbs and releases cyclic energy.

A conceptual biotope, “Paradise Found” becomes a living space in which a spontaneous community can develop and flourish. A garden of elemental encounters and pauses, of desires and longings, the Franziskaner-Klosterkirche remains become a shelter and incubator for creative development and self-expression. On the final night, Los Angeles-based rising pop star Dorian Electra‘s music defies convention with their futuristic spin on 00s pop, 80s funk and a long-standing love of satirizing rigid gender roles and views on sexuality. South London lyricist and DJ SHYGIR showcases her talent for finding sounds from all your favourite club nights and giving them back doused in sarcasm and a dark-sided humour. Multidisciplinary artist i.Ruuu embeds marginalized narratives through experimentations of color, space, coded sound, noise in their elaborate solo and group performances, and installations, while DJ, artist and curator Brooklyn Bridge produces heavy mixes laden with rave, noise and pop-cultural references.

Creamcake’s “Paradise Found” is part of this year’s summer program of the The curatorial focus is the medieval garden as a place of change and transformation. Against the backdrop of traditional ideas of the Garden of Eden and alchemical sciences,and the ancient desire to prolong human life, the program investigates the myth of “paradise” and utopias of survival. Musical vibrations transmit between bodies of all kinds —people, plants, these crumbling monastic walls—creating a lively and reactive presence that absorbs and releases cyclic energy.

Creamcake is an open and queer platform dedicated to exploring the impact of the Internet on music at the intersection of music, art and technology. Founded by Daniela Seitz and Anja Weigl in 2011, together they initiate and organize concerts, performances, symposiums and digital projects; lectures, workshops, exhibitions and festivals, including 3hd, インフラ INFRA, NextGen, Europool and “<Interrupted = “Cyfem and Queer>”. Each of these projects question conventional patterns of thought and behavior, create new space for action and reflection, and approach digital change with a fundamental openness and flexibility. Cooperating with a number of community spaces and institutions such as OHM, Südblock, Berghain, HAU Hebbel am Ufer, Bob’s Pogo Bar, Goethe in the Skyways, Creamcake presents visionary, nonconformist and experimental sounds, while actively encouraging women and people of all genders to work together on an equal basis. They also run a label.

What? Creamcake: Paradise Found
When? 27th of July 2019 + 17th of August 2019
Where? Klosterruine Berlin
Tickets: https://www.residentadvisor.net/events/1274422
Tickets are also available at the official box office situated at Klosterruine on the day of the event.

Paradise Found is made possible with the support of Musikfonds e.V. by means of the Federal Government Commissioner for Culture and the Media, the Senate Department for Economics, Energy and Public Enterprises and the Borough of Berlin Mitte.