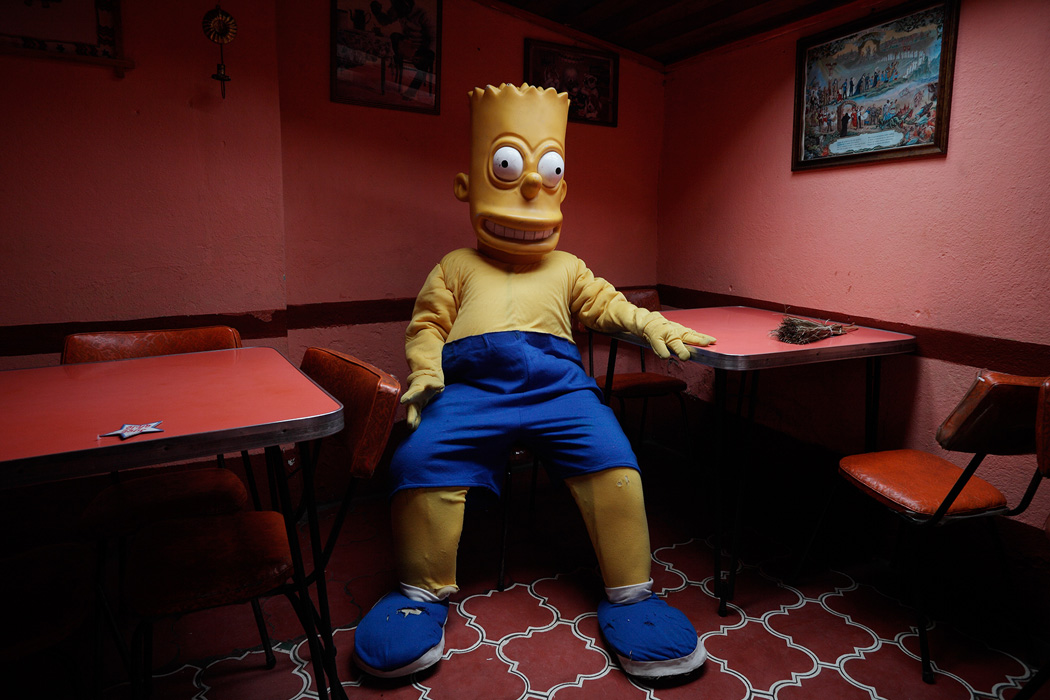 Eny Roland Hernández is a photographer from Guatemala. Eny does a lot of street photography, and most of the time you can see his work exposed on the city walls. His serie “El Convite De Totonicapán” is a satyr of our contemporay era.  “In the state of Totonicapán, the fight for the head of the community is manifested symbolically in the public dance: el Convite.  Practiced since 1946 until today, el Convite has been administered principally by local buerocrats, former mayors, teachers, and well known social figures located in western Guatemala.”

“El convite is presented every December 25.  The dancers, (exclusively ladino men), completely disguised, move in pairs through the main streets of downtown Totonicapán for 15 hours until almost midnight when they are “uncovered” by their family and friends.  The costumes are designed to represent cultural characters from around the world from showbiz, hollywood movie stars, cable television cartoon characters, soap opera protagonists, as well as invented personalities, and the rare local or international political figure. The event is related to the local ladino power and the exclusion of the indigenous population.  El Convite continues to manifest the morality, civility, and citizenship of ladinos in nineteenth century Totonicapán, as well as using instances of local power and connections to include themselves within the Totonicapán identity.”

These elements intend to legitimize the “modernity”, in turn modeling “anti-modern” identities for the indigenous population and hiding the discriminating hate speech that is written between the lines.

The “Totonicapán-ization”, or this intent to redefine themselves as social subjects from the region – in a nation – can be seen as a form to procure new spaces in the historical tradition. The strategy of the el Convite dancers to be part of the fashion of multiculturalism, and then claim to be part of folklore should be taken into account.