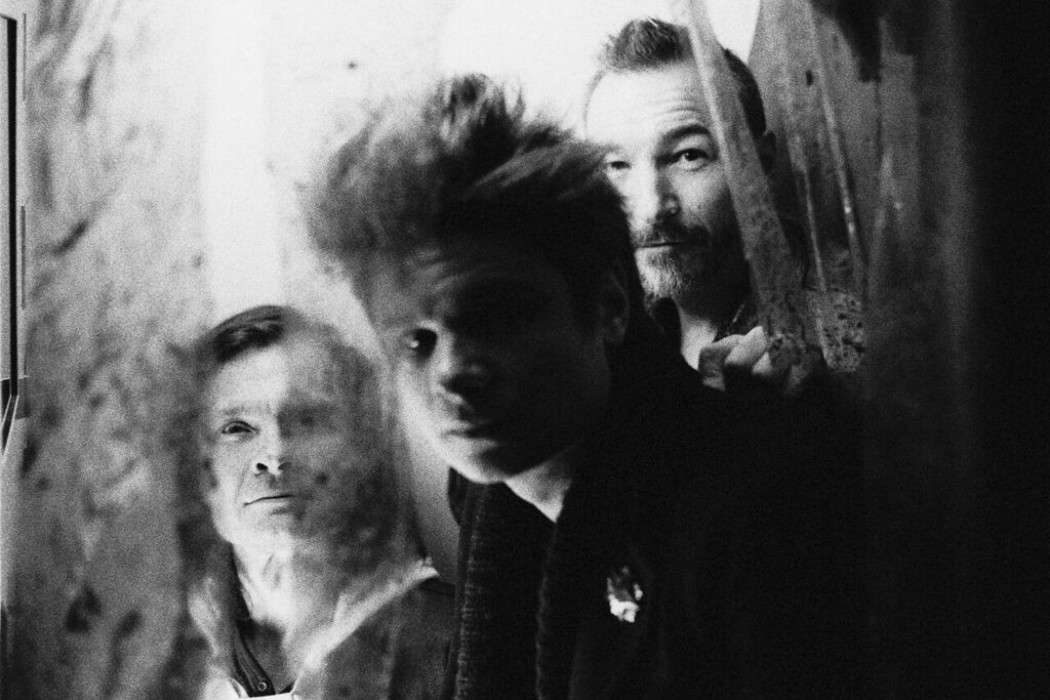 Courtesy of Pamela Maddaleno
Music
·May 4, 2016

KALTBLUT is excited to present a new album stream, UNWORKS & RARITIES, from the beautifully atmospheric group OISEAUX-TEMPÊTE, along with an exclusive interview. Since 2012, the French “free-rockers” have been making instrumental and experimental rock that’s both heavy, and provocative. The band, formed in Paris, is the core duo Frédéric D. Oberland & Stéphane Pigneul, beside drummers Sylvain Joasson, Ben McConnell & Jean-Michel Pirès. Their music was initially made alongside photographer Stéphane Charpentier, in order to document the existential conflict caused by the political and economic upheavals in Greece. For their last major album ÜTOPIYA?, their travels moved to Istanbul and Sicily, and the group expanded with the addition of G.W.Sok (The Ex’s former vocalist) narrating Nazim Hikmet’s poems, and Gareth Davis on bass clarinet; still free, more punk, pursuing their sonic odyssey around the Mediterranean Sea. Including the same previous guests, their new album also features unreleased cosmic sessions with Ondes Martenot’s virtuoso Christine Ott. This is the first volume of UNWORKS & RARITIES, a new series compiling unreleased pieces by the group. Following their two acclaimed first albums, ÜTOPIYA? in 2015, and S/T in 2013, this opus pushes new boundaries, and crystallizes precious moments of sonic bloom, from ambient soundscapes to free-noise, and krautrock inflected improvisation. The landscapes they create through their soundscapes are always rich, stirring, full of colour and texture, and entirely cinematic. What’s more, and what’s most important, is that it feels so human. Commanding more than just your ears, from guts to grey matter, OISEAUX-TEMPÊTE will hijack your insides. We spoke to Frédéric and Stéphane about the avant garde influences behind their sound, the darkly magical history that inspired the artwork for this album, and they reveal what they have planned for us next.

KALTBLUT: So first of all congratulations – we’ve been listening to ‘The Strangest Creature On Earth’, and are really looking forward to hearing the rest of UNWORKS & RARITIES.
Frédéric D. Oberland: Haha, thank you! We like this track as well. It was recorded at home as a pure improvisation – Jos aka G.W. Sok was reading this poem by Nazim Hikmet. It’s almost acoustic: a reed organ from 1905, tuned in this weird 335khz thing, Stéphane is playing a bow on his bass VI, and Gareth caressing his bass clarinet.

KALTBLUT: So these jams were purely exploring and experimenting what you could create together?
Frédéric D. Oberland: Yes and no. It was actually already our music. Each jam we’re playing could be a release, we have to build all the ritual around to make something appears. Complete improvisation.
Stéphane Pigneul: The final project wasn’t the purpose at the beginning. It was more the joy and the pleasure to write together, so we decided to go quickly in studio – and the band was born, without even a name.
Frédéric D. Oberland: Exactly. And we recorded our first album like this, a trio. Including Stéphane Charpentier, who was there sometimes to screen some of the images he had from Greece.

KALTBLUT: Interesting introduction. So how did you come up with the name?
Frédéric D. Oberland: We exchanged ideas around the name. How hard is this thing each time, right? Oiseaux-Tempête is a kind of Storm petrel. It does exist.
Stéphane Pigneul: You can actually see one just before a storm on the ocean.
Frédéric D. Oberland: Birds you can only see when the storm is arriving. They’re putting themselves at the helm of the ships in the middle of the storm. It’s also the name – we discovered afterwards – of a little Post-Situationist Canadian fanzine from the 90’s, but without the ‘X’.

KALTBLUT: Why did you feel this fit your music?
Frédéric D. Oberland: Well. I never thought about this actually… except that when we’re playing there is often a storm arriving – which is the pure truth. Music can be seen as a weather report, right?  There is a general type of weather right now in our countries (politically, economically, musically, etc.) and maybe we’re trying to build a kind of micro-climate. Ah, French avant-garde shit!

KALTBLUT: This album has grown out of, but also departed from ÜTOPIYA?. How did you experiment with and explore what you were creating already, and maybe push new boundaries?
Frédéric D. Oberland: After ÜTOPIYA? we felt that it was time to try to build this kind of hybrid LP. They were a few tracks we were amazed by, and also some collaborations we liked. And it built up easily. There was almost a special spirit of it as for our proper albums. It sounds a bit like a transitional album in a way, and we liked that. With ÜTOPIYA? we arrived in the studio without any ideas of what to do. Completely.
Stéphane Pigneul: As we did for the next one in Beirut, Lebanon. But that is another chapter yet to come.
Frédéric D. Oberland: We’re talking about a new album for next year! Our last travels two months ago were in Lebanon.

KALTBLUT: You’ve been creating the unreleased material that composes UNWORKS & RARITIES since 2012 – tell us a bit more about the creative process behind it and how you collected these pieces?
Frédéric D. Oberland: Well, nothing was planned at the beginning, as always – BUT.
Stéphane Pigneul: The thing is that when we’re in the studio we play a lot, coming back with a lot of material. The best pieces go on LP, and we thought there was still some enough good stuff to share.
Frédéric D. Oberland: After S/T in 2013 we did a remix album called RE-WORKS in 2014, asking a few friends to destroy the tunes of it. Then we did ÜTOPIYA? in 2015 – studio times with Gareth Davis on bass clarinet, and G.W. Sok.
Stéphane Pigneul: And of course this piece with Jos that came from nowhere.
Frédéric D. Oberland: And as Stéphane said, we’re trying each time to make albums, not a compilation of nice tracks. And some of the tracks from these two previous recording sessions didn’t find their place in the first two albums. Plus a few extra recording sessions we did with Christine Ott, and with our other drummers Sylvain Joasson & Jean-Michel Pirès. We’re trying to record almost every time we’re playing in fact.
Stéphane Pigneul: Everytime and everything!!! Yes that’s it!! Until we get this magic link all together. We will continue that I guess.

KALTBLUT: How do you feel the artwork and wondering how it fits in with your music, how you interpret it?Frédéric D. Oberland: Artwork is ALWAYS important.
Stéphane Pigneul: It’s the same thing, we have to be completely taken by a picture.
Frédéric D. Oberland: For S/T it was some photographs of Stéphane Charpentier. For Re-Works, it was a reinterpretation of the S/T cover by the artists Brian Cougar and IAMSAILOR. For ÜTOPIYA? the cover was a photograph from Yusuf Sevincli. For UNWORKS we had a few primary ideas regarding this new possible series of unreleased material.
Stéphane Pigneul: And Fred had this wonderful photograph he shot, so we used it.
Frédéric D. Oberland: The photos were shot in Turkey in Cappadocia (for UNWORKS front/back cover) in the old troglodyte churches, where four different generations occupy their walls, each time destroyed by new inhabitants, putting icons on the old iconoclastic first symbols. Then the icons were destroyed by Ottomans, or people just wanted to steal the eyes, or the hands of the drawings. Then again, new icons and new degradations, until now, where sometimes tourists are still taking parts of it as ‘souvenirs’, a tapestry of civilisation. That’s what we’re working around with our travels around the Mediterranean sea (Greece, Sicily, Turkey and the next one in Lebanon).

KALTBLUT: So you mentioned working with Jos on The Strangest Creature – when another artist is present in your music, what are you drawn to and looking for, in collaboration?
Frédéric D. Oberland: We also worked with Jos on Ütopiya / On Living (in the ÜTOPIYA?) album.
Stéphane Pigneul:  And improvised during concerts as well with both of them.
Frédéric D. Oberland: Well, we asked him first. On ÜTOPIYA? there was this track we were thinking that it could be beautiful with his voice. We had the poem in mind. He said yes, and did it. We met in Paris, did few shows and tours together. And built new songs…
Stéphane Pigneul: It feels so natural with him.
Frédéric D. Oberland: Jos has got this indomitable energy. For me he is a legend, and so easy to work with – same spirit, same desire, same spontaneity. But I guess we’re lucky, all the people we’ve worked with from the beginning are amazing people. We’re not in the kind of economy we can pay people a lot of money to work with. So all the people involved are sharing this same DIY spirit. Really important to know as well.
Stéphane Pigneul: The fact is that we just can’t separate thèse two things you’re talking about.
Frédéric D. Oberland: Yes. Of course you can play good music with people you dislike, and shitty music with people you like. But the best is to get both. And to be honest, when you’re on tour, in the van, with all these miles and depressing unknown gas and eating stations, it’s better to like your bandmates.

KALTBLUT:  That’s the dream! So what has been your experience of playing live together – what do you take from your live performances that then maybe has an effect in session?
Stéphane Pigneul: First of all, the sound.
Frédéric D. Oberland: Yep, the sound. Our sound changed with the concerts.
Stéphane Pigneul: If there is one thing we pay attention to during shows, it’s the sound, we call it the ‘bubble’. The feeling and the sound must be as one, and be part of the essence, of the music itself.
Frédéric D. Oberland: Yep, like a big balloon of sound in which we can all feel comfortable with. That’s the key.
Stéphane Pigneul: The room, the space, the people.
Frédéric D. Oberland: The space vibrating around you, the wall and the people reflecting the sound. For me that’s a kind of ritual which is different all the time. If this bubble is there you get more chance to play well. And as parts of our shows there is always improvisation, so if you don’t get this bubble that could be more risky that you think. We’re playing in like a big triangle on stage. Stéphane and myself are on the sides looking to each other, embracing Jos when he’s there. It’s a half circle in which the audience in the last wall of this circle. That’s really important for us. We want  something to happen, so it’s not déjà-vu spectacle.
Stéphane Pigneul: And it’s different every time. We have to learn a bit how we played on record, to have a canvas for our own songs during shows.

KALTBLUT: What direction are you hoping to take the group and your performances in future?
Stéphane Pigneul: It is still a work in progress, but we have already got a good half of the next album.
Frédéric D. Oberland: Yes, this upcoming album is still a big surprise for us. We have already recorded some crazy things, jamming with some great people from the Beirut scene. Could our music bring you to think a bit sometimes? If it is working for some, then we will be happy.

UNWORKS & RARITIES is released on May 13th via Subrosa, pre order here.