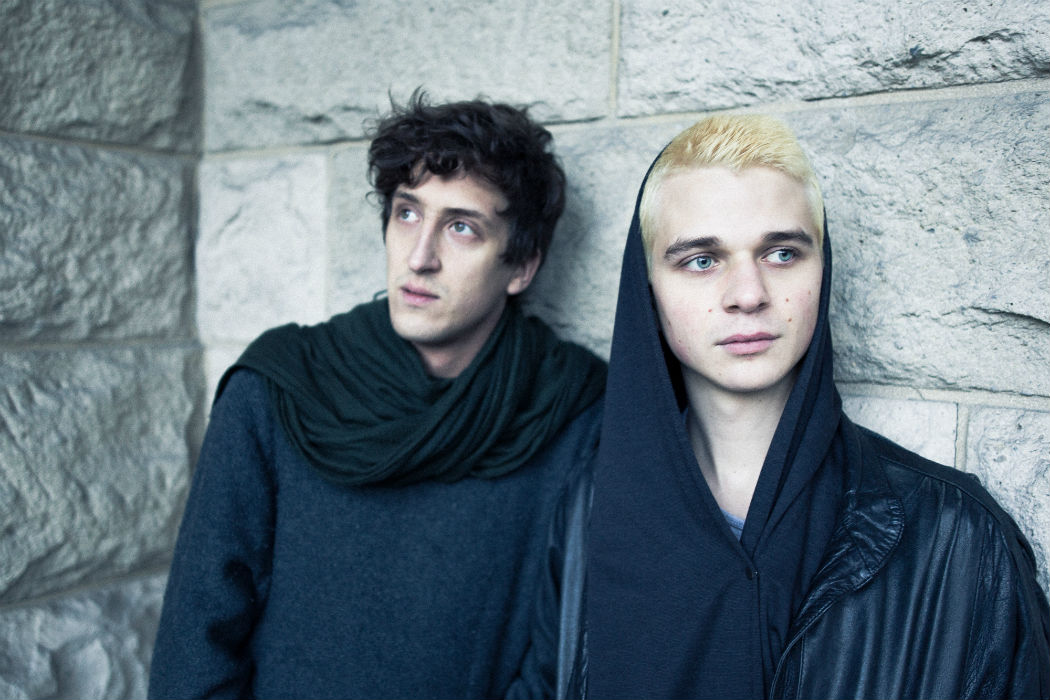 Today we’re hosting the brilliant new single ‘Darwīš’, taken from the new album of the same name from Parra for Cuva & Senoy. After finishing up their semester at University, Nicolas and Jonas – or Parra for Cuva & Senoy – decided to pack all their gear into their camper and go on a road-trip down to the eastern coast of Spain. The car filled with all kinds of gear, from synths to speakers, guitars, and percussions amongst other tools and toys, three creative weeks ensued, creating music with a view out to the sea. While taking everything in and doing daily trips, the two were able to create enough song ideas in three weeks to spent the rest of the year at home in the studio to finish all arrangements and mixes. We met in one of the many beautiful central parks of Berlin to talk about their new album ‘Darwīš’ coming out on Project Mooncircle May 27th.

KALTBLUT: Let’s talk about your time in Spain
Nicolas: First of all we played together for a few years. Maybe three years, doesn’t feel like that! So then, I made my first record and afterwards you fall into this “What shall I do?”, so during my semester break at Uni I decided to go to Spain. Also after winter I wanted a little holiday and get a bit of a tan! So yeah, I thought I will take some music stuff with me and asked Jonas to come with me. There was really no plan, it was maybe a week before that I asked. So my mum actually rented this place and we drove down in the car, in this like VW family car with all this equipment. Speakers, three guitars, computers. [Laughs] Jonas: My fucking ukulele! Am I even saying that right? That is a tough word. There’s actually a lot of it on the record.
Nicolas: But yeah, we drove down and had a couple of gigs on the way. So we set it all up in the kitchen with this really bad acoustic.
Jonas: Yeah it was so bad! We took a lot of stuff to record too, like all these microphones and shakers.
Nicolas: We had this awesome view, but the sound. We had this weird beep sound from the Wifi in the background of everything we recorded.

KALTBLUT: Sometimes that’s good to get a bit of a rough recording like that though
Nicolas: Yeah definitely. You can hear this whole reverb, but whatever. Like sometimes we kept hearing people walk past or doing the dishes! So we’d be banging the walls. Some of my first tracks I recorded in the basement of my parents house. It’s not always about the sound, it’s the motivation that’s there.

KALTBLUT: Especially when you end up sometimes going over work and ruining it
Jonas: Getting rawness into sound is actually one of the hardest tasks in electronic music. Making it sound real and natural. So I think bad soundings room pushes creativity in a way.
Nicolas: So yeah we spent three weeks there, sometimes doing things, sometimes not. In the end we had 16 tracks. Basically what we did was have some recordings and ideas then went back home. I also took some older tracks with me, there’s two on the record. Pretty much everything was done over there though.

KALTBLUT: Did you meet any locals?
[Both laugh] Nicolas: There were a lot of old people. It was totally out of season too.
Jonas: The people who were renting the place were also really… nice. Super German.
Nicolas: Kind of the people that decided not to live in Germany anymore and move away to rent out houses. They were super weird. Giving us a hard time. [Laughs] Jonas: They were definitely not as chilled as you thought people would be if they moved away to that area.

A woman sits down right next to us, asking if we want some grass…
Nicolas: Not today, maybe later…

KALTBLUT: … So the neighbours?
Nicolas: Yeah, they were typical Germans living in a small village. Very conservative, strict. I mean, there weren’t many people there but it wasn’t so bad. Relaxed. Also what I was looking for was, when you stay in Berlin you produce music in your bedroom, moving to different places gives you much more energy to sit down and really think. There’s always just stuff going on, people that you have to drink with. [Laughs] But you get more carried away in a different place where you can concentrate on one thing.

KALTBLUT: Do you think you found a new direction then?
Nicolas: I think it sounds different from the stuff before. It was a good step forward.
Jonas: Yeah, we were sitting down making tracks every day.
Nicolas: In comparison to the length of time it was much quicker. You stay in one certain state of mind. And when you’re in one place for three weeks you have these different thoughts.
Jonas: It’s one of the hardest things, finding a record and sticking to it. Even though there are a lot of different tempos in the album there’s definitely a line.

KALTBLUT: When you went back to Berlin, did you have the same thoughts about your music?
Nicolas: We came home and I went to India and toured again and then it took half a year after until we really sat down and mixed the album. So you kind of felt the energy of the place but it was already long gone. Most of the time when you start working on stuff which is half a year old, it’s a drag, but we still loved the tracks. They were fresh.

KALTBLUT: Did you have to do much post-production?
Jonas: Yeah absolutely. I think that was it about the tracks, I was really surprised by the quality of the ideas but I was very underwhelmed by the quality of the sound! [Laughs] In Spain we only did the things that were fun. When the tracks became less fun, we left them. So some were finished and some were really rough.

KALTBLUT: I like that there’s this constant sound of the ocean in the background in almost every track
[Both laugh] Nicolas: Really?
Jonas: Yeah I like that, it’s really beautiful.There was also this view that he was talking about. Behind the window there was this massively inspirational view.
Nicolas: And also there was this pebble beach nearby that made this noise whenever the water came in and out, so we recorded that for like all of our drops! So that was it. [Laughs] Eventually my feet got wet.

KALTBLUT: Do you think you’d go somewhere else to record the next album?
Nicolas: Maybe a forest in the winter.
Jonas: Yeah, like a forest album and then a desert one. Snow album.
Nicolas: We’ll see.

KALTBLUT: Yeah I mean, I don’t know how much sound you’ll get from the desert
Nicolas: A bit of wind.

KALTBLUT: Or maybe some desert beetles. Or those somersaulting spiders
Both: Spiders?!

Darwīš is coming out May 27th on Project Mooncircle
ALBUM