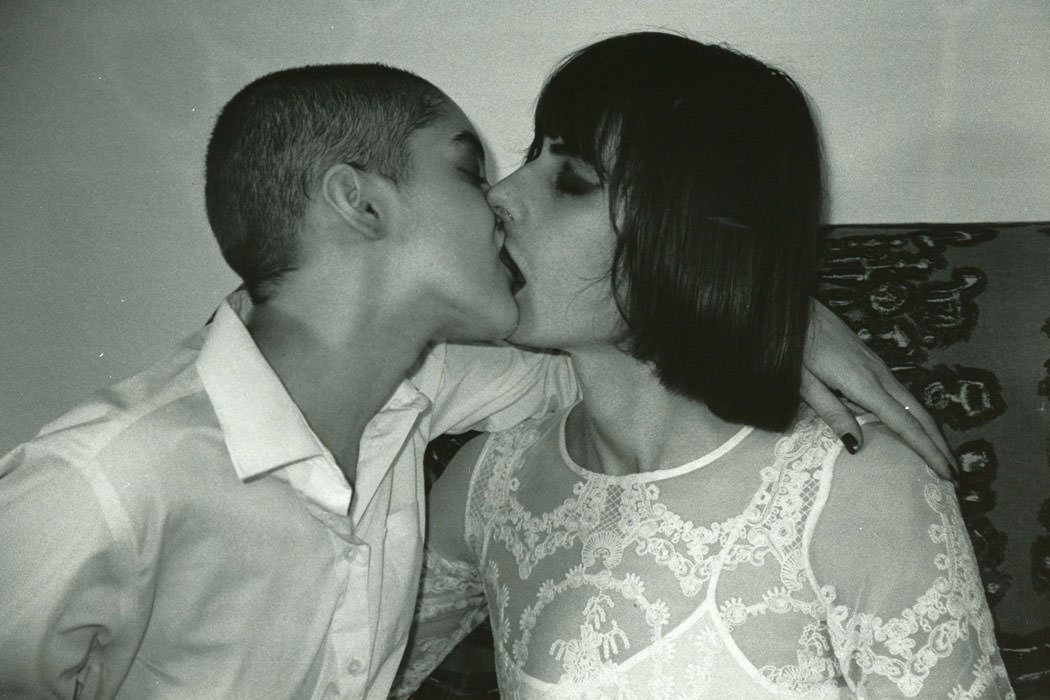 Anna Sampson is a London-based fine art photographer originally from Liverpool. She graduated last year  with a series of portraits entitled ‘Gender Trouble’. Her practice explored the territory of gendered stereotypes by examining and questioning orthodox concepts and definitions of gender identity. When Anna reached out to introduced herself, I was very pleased to get the chance to talked with her about her work.

KALTLBUT:  First of all tell us about your creative background – when did you first start photography/what really pushed you to do so?

Anna: I was a painter initially, and it wasn’t until the final year of my degree that photography became the fore-front of my practice. It was about two years ago that I sneaked into CSM’s darkroom with a friend’s help – as Chelsea didn’t have one, nor the means for me to access one. He showed me how to process and print my film and I guess I’ve never looked back from there. I grew too impatient for painting as I could never see a painting through to the end and was never happy enough with the results. With photography however, I still find the process stimulating and ultimately very rewarding.

KALTLBUT: You recently graduated from the Fine Art BA at Chelsea College of Arts last year, where the central focus of your work was a series of portraits entitled ‘Gender Trouble’. Can you tell us a bit more about this specific project.

Anna: Gender Trouble coincided with my dissertation – which was a study on fetishistic scopophilia and the female gaze. I studied the active/passive binary within film theory and practice, paying particular attention to how women are often objectified, sexualised and fetishised in the eyes of the male. Gender Trouble, is my way of addressing and challenging this notion as to merge and blend gendered cliches and stereotypes. I’m ultimately hoping to free gender from it’s bipolar shackles, proving it’s not just male or female, black or white, etc. I want women to be seen not as the passive sex, but as equals.

KALTLBUT: Why do you think that challenging gender stereotype is so important nowadays?

Anna: In my little bubble you forget the ignorance that surrounds gender, sexuality or racial issues exists as everyone is relatively liberal and open-minded, but tragically it’s still a serious concern worldwide. There are still so many people out there who are utterly clueless and terrified of change (take Brexit for example). It’s brilliant to see those having the courage to express their true identity or to feel comfortable in their own body despite what society/media deems ok. Women are still not treated as equals, nor transexuals or gay men – and this is why it’s important to keep challenging these issues.

KALTLBUT: How did you find the person you’ve photographed for “Gender trouble”. What was your “criteria” to shoot them?

Anna: Everyone I have photographed for this project thus far are friends, or friends of friends who have become friends as a result of me photographing them. Luckily in London there is a wealth of pretty effeminate boys and androgynous women who are happy to be photographed for fun. There are certain people I meet who I just really want to photograph, and that’s my only real criteria. I generally know what I’m looking for aesthetically, but I leave the shoot itself pretty open with little direction so it’s natural and honest (as much as can be for a staged photoshoot). I’ve rarely photographed people I don’t know; I like there to be a level of trust and familiarity with my models as they are pretty intimate shoots for all involved.

KALTLBUT: What where you looking to capture exactly ?

Anna: Honesty mainly. I like that I’ve not photographed models, and that they are young and attractive but who are also quite camera shy and awkward despite being musicians mostly, so natural performers. I like this vulnerability and was probably mindful of this when selecting people to shoot. No-one that I’ve photographed are cross-dressers as such but are naturally flamboyant and eccentric so to dress up wasn’t completely out of character.

KALTLBUT: You’ve met so many people through this project. I guess it also a really strong human adventure. Is there any anecdote or particular story you’d like to share?

Anna: Yes, a very strong human adventure for sure. I’ve learnt a lot about myself through this project, and as a photographer. I’m self-taught and learning as I go; it’s very amusing to see my first darkroom prints from two years ago, compared to today. It’s been a lot of fun though – particularly as it’s been shared with close friends. One story that springs to mind is that when I photographed Bella and Ryan, by accident Ryan ended up in the dress that Bella wore when they first met or on their first date, or something cute like that.

KALTBLUT: What is the message you want to get across to viewers of your work?

Anna: That gender is not just male or female, or that we are straight or gay. I want people to see that there are more than two genders, and by turning traditional gendered stereotypes on it’s head I hope it will contribute towards celebrating queer and LGBT identities too as well as harmony between the different sexes. We’re all human and we’re all the same and deserve the same opportunities and respect.

KALTLBUT: What, in your opinion, can/will actually makes people open their minds or realised that we still leaving in a patriarchal society and that this need to change?

Anna: I really don’t know. It would take something very drastic to change this once and for all, and I don’t see that happening anytime soon. I was hoping having Clinton as president would be a step in the right direction for powerful women to be treated as the norm in society, and not as a rarity. It would have been a very special moment in history (despite not agreeing with her/her policies) but instead we’re left with Trump and feel more defeatist than ever. It’s like we’ve gone 50 steps back.

KALTLBUT:  Do you consider yourself as feminist? In which way? And how do you express it through your work?

Anna: Yes, of course. It really worries me if anyone is not a feminist, male or female. In my work I’m essentially trying to show that it really doesn’t matter who wears what or looks like who. It’s been fun to put the man in the position of the objectified and often sexualised woman; to revert the male gaze upon the man himself and by reclaiming the female gaze, I really hope it empowers women to feel powerful and active, and not passive nor weak.

KALTLBUT:  You’re based in London, one of the most dynamic city in Europe. How does it impact/influence your work?

Anna: Undoubtedly yes, for both good and bad. It’s certainly helped being surrounded by such inspirational, open-minded and talented people who have made my practice possible but it comes at a huge price. It’s no secret London is extortionately expensive for an artist to survive – it’s a constant battle of earning enough to make your art possible, but losing moral and enthusiasm as a result. I’ve found a happy medium at last, but it took me a long time to get here.

KALTLBUT: You mostly shoot in black and white, any specific reason?

Anna:  I don’t know how to process or print film in colour yet. I use polaroids for colour, and sometimes I think that I prefer these images. I think I’d like to print in colour one day when I have the funds to – but I’ll always prefer black-and-white imagery. It’s more powerful.

KALTLBUT:  What are you working on at the moment?

Anna: I realised that I’ve mostly photographed pretty men as women. I’m trying to find masculine women to photograph at the moment, like butch, muscley women. I’d put them in very feminine dresses. I want to do a solo-show too soon maybe and make a artist book/zine with my favourite images.