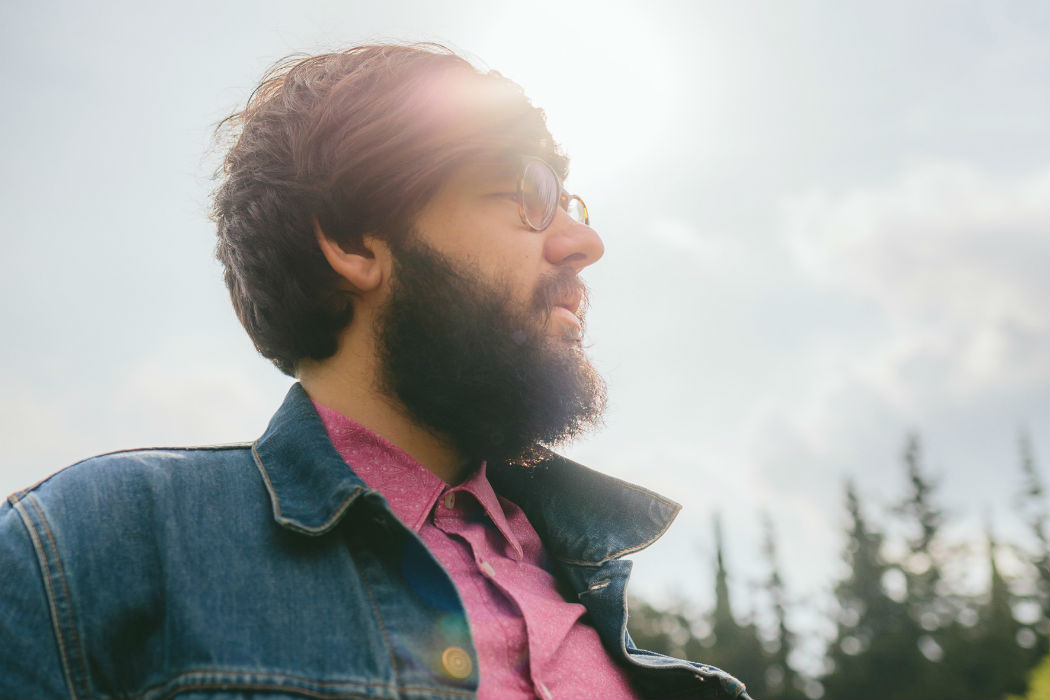 Sounds especially curated for your weekend! This week we have Kid Flicks’ amazing 78′ mix featuring only Dan Snaith’s (Caribou, Daphni) music, including personal favourites, tracks spanning his whole career, original tracks from samples Dan has chopped, edited, remixed and then re-edited by Kid Flicks himself. In doing so, Nickos Dervisis aka Kid Flicks, highlights the vibes he gets when listening or studying his music, “He is one of my biggest influences ever… when I first saw him live as a young kid I immediately wanted to start making music” Hit play and read up about the Athens-based producer, songwriter and graphic designer below!

KALTBLUT: When did you start playing music?
Kid Flicks: Hmm, I used to play in various relatively unknown and unimpressive noise, experimental and punk bands as a teenager. I started performing as Kid Flicks in 2011. Prior to that I was making music as “flight36-B” [comes from the first flight I ever took and it’s actually the gate or some other code I saw on the ticket] which was a way more naive and amateurish free form and noise influenced project. After a while I took a poppier direction, but wasn’t feeling like giving up my weirdness and this may be the only rule I have set: f*ck up the tracks that sound normal. Other than that I’ve gone to many directions, alone and with the band, and feel like I should be going way way deeper into unknown fields which I find scary and interesting.

KALTBLUT: How does Kid Flicks sound live?
Kid Flicks: Until 2013 it was only me doing everything. I think many of my lo-fi-ish recordings of that period sound terrible. I barely consider them as albums. I used to perform live with a sampler, guitar, loop pedal and a mic or just an iPod and a mic and I felt like I was doing so little, so sometimes I did some weird gimmicks like breaking a piñata filled with candy with a lightsaber in the middle of the show, which didn’t go really well cause I tied it kind of far from the stage and I was afraid of breaking the lightsaber so it took a while to break open. Also the audience barely even noticed and nobody ate any candy, even when I said “there’s candy on the floor.”

So yeah, stories like this one are among the reasons I decided to work more on my live shows. I’m super lucky because the current line up is practically my family! My girlfriend and my two best friends. Right now we perform with sampler, electronics, vocals, bass and two drums/percussion kits (also containing electronic pads, etc.). We are able to perform as a duo, trio or quartet, and we practiced hard on that to be able to sound good in all versions. The main reason for this is because Harris is living in Edinburgh, I’ll be in London next year for a while, Danae may move to Amsterdam and sometimes there are gigs where we can’t perform all together. The ensemble works more on the live shows rather than the studio recordings, where I’m more by myself. But in our occasion our gigs need the most work to keep a balance between the samples/electronics and live instruments. we love stretching and altering the tracks and every time it becomes a whole new thing. The guys were the main influence for this album’s sonic direction as I didn’t have so many live drums and percussion on previous recordings. Currently we’re trying the opposite: We’re jamming on loops, samples and parts I’ve made but not finished to see if some cooler idea comes up. But it seems the new album’s taken an even more electronic direction than the one just released.

KALTBLUT: What influences you lyrically?
Kid Flicks: Lyrics are my worst. I’m seriously not a very expressive guy so I’m mainly working on the melodic part and then throw in phrases that fit each theme. They’re mainly in English with an occasional Greek word or phase. “xxt”, a track from 2012 is sung entirely in Greek. When I write lyrics I always have this feeling I should take out my demons and worst fears, so they tend to become kind of abstract, self-referencing and gloomy sometimes. “Don Quixote” for instance is actually one of the album’s darker tracks, even though harmonically it sounds cheerful. Its subject is based on those heavy depressive periods we sometimes go through, when our motivation and self esteem levels are at 0% and we’re living in a feedback loop: sleeping in embryo position, crying, watching crappy shows or Rom Coms (or kid flicks) thinking of our childhood years and hating ourselves. I had many of these phases from my early teen years and I recently see many of my friends and people I know going through them. Some general reasons, besides the personal ones are: the deepening of the Greek crisis, the lack of jobs in many fields, the lack of hope and practical impossibility of following your dreams, the fact that Europe is treating the refugees like sh*t and you actually see these amazing people struggling everyday and who says we’re not next? Things are pretty f*cked here.

KALTBLUT: What are your main influences?
Kid Flicks: I love listening to new music and falling in love with new stuff and I’m doing it almost every day. I really really can’t keep track of what influences me! I just let it happen. Mixing diverse influences together is a challenge I always love. Making weird beats, synth designs or structures as well. I love world music, especially Greek, middle eastern and African and I enjoy translating these elements into my music. I love my friends and our ensemble and evolution, jams and different music tastes and this is maybe my biggest influence. I’m always trying to incorporate non musical references at least in a personal way. I love traveling and doing field recordings in various places. I love my portable gear (Macbook, analog 4, sound card, mic, iPad, apc mini, hard drive with sample libraries) and making music anywhere out of my studio. And many more things as well.

KALTBUT: Why did you name your project Kid Flicks?
Kid Flicks: I went to a private school in Athens which was far from my house, so all my friends were living quite far. The neighbourhood kids saw me as an outsider even though we hung out, cause they all went to the same school. 4 months every year I was staying in Lefkada, the island I’m from, and even though I had friends there it was just for a limited period. Anyway, I was a super lonely kid and there was this habit I developed throughout my grade school years: I loved watching kid flicks (Disney cartoons, 80s-90s-family films, etc.), as well as some more mature movies and for some reason I loved to record them on VHS from tv and designing their cover by doing collages with stills from the movie I found on tv guides and such magazines my parents bought. Still love these movies, love their sterile, perfectly idealised atmospheres, even though it’s very wrong most of the times! favourite VHS covers: Who Framed Roger Rabbit?, Ace Ventura: When Nature Calls, Problem Child 2, Jurassic Park, Honey I Shrunk The Kids, Young Frankenstein…

The self-titled debut album from Kid Flicks is out now, get it here