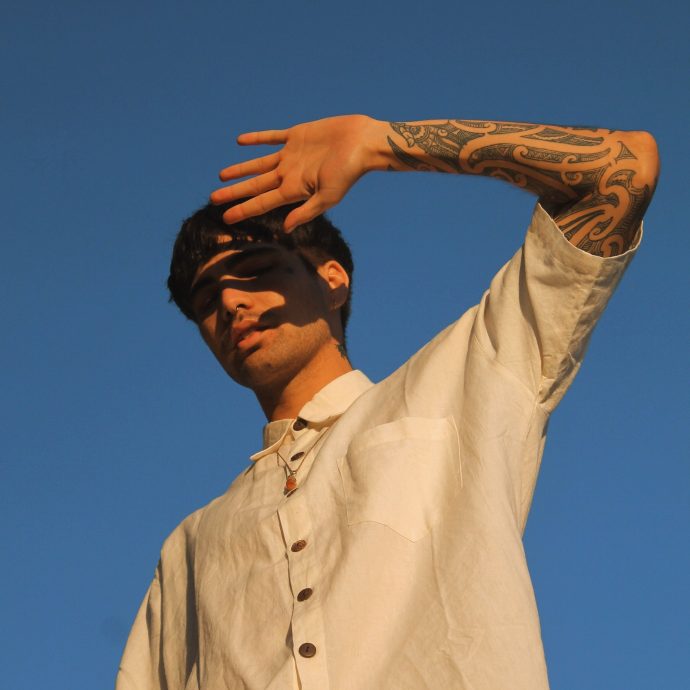 Oh Boy follows the release of his new EP ‘Brentwood Heights’ with the psychedelic music video for ‘Angels 888′ featuring Tim Nelson of Cub Sport. The spiritual journey was created with the help of close friends and shot in just one day, with Oh Boy stating that the concept of the video was based on “gathering friends to create a transcending experience and raise the Earth’s collective consciousness”. Think Google’s Deep Dream generator but with much less terrifying results. The Sydney-based producer has been making waves since collaborating with friends like Golden Vessel, BLESSED, Ninajirachi, Mallrat and now partnering with Cub Sport for the otherworldly ‘Angel 888’.

Oh Boy continues on the video, “I gave that concept to Beige Boy (Patrick Bahi) and LOVER (Oliver Kirby) and from there we built ideas about how and where we could shoot it and what would be involved in shooting such a thing. LOVER and Beige Boy put in an insane amount of groundwork into planning the video and it would never of happened if it weren’t for them. I FaceTime’d Tim and Sam from Cub Sport one morning while I was at a cafe in Parramatta and explained the concept, how we could potentially shoot it and when we could do it and it just happened to work out perfectly for next time date they were coming down to Sydney (the power of manifestation is insane). Everything in the video is from our house, the crystals, the throws, the lights.

We shot everything in 1 whole day. All of my housemates helped with everything including being extras, sorting out catering, set design, driving people around and just being positive spirits that made the entire day a lovely experience. We had our friend Conor come through with the most beautiful camera to shoot it with, and a close friend of ours who shot some of the Brentwood Heights content came and shot BTS photos as well. I’m so thankful for the people I’m surrounded by and the group I live with and get to hang out with every day.

Director Patrick Bahi says, “We’re all super close friends, the artists and everyone involved behind the scenes, and we initially caught up to discuss the general concept of the clip. We didn’t want to plan too much, just have some kind of idea about what direction to follow and pull it all together in the editing lab. We didn’t even have a set format going into the shoot, we kept experimenting hoping to execute a blissful, loving psychedelic inspired visual ting and I think it reflects the track perfectly. ”

Since its release earlier in the month, EP ‘Brentwood Heights’ has gained strong support from community radio and online media with tracks landing on playlists such as Spotify’s ‘New Music Friday’, ‘Urban Flavour’ and ‘Indie Arrivals’.